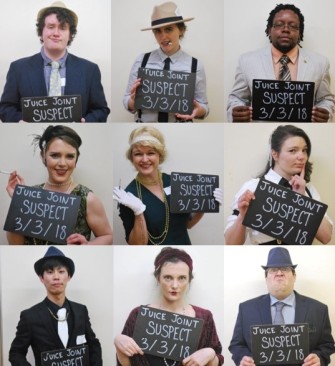 The dismal rainy weather did nothing to deter Miyazaki’s finest flappers and sneakiest mobsters from attending the secret party at Rosie Marie’s speakeasy in early March. Sakatani Roadside Campground Centre had been dolled up as the jumping Juice Joint, complete with a bar manned by Gino Gin and the sultry tones of Dina Diva’s vocals. The guest list included two warring mobsters, Southside Sal and Notorious Nick, whose names were on everyone’s lips all night. Was one of them responsible for the recent death of Rosie’s husband Louis? Upon arrival, everyone was handed a mysterious envelope by waitress Kitty Cocktail, the instructions and contents of which possible held the answer to that very question. 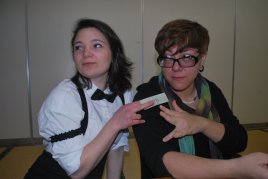 To pay tribute to Louis, everyone brought a plate to share. There were cheese platters, Lucille Flapper’s famous lemon slice, pizzas, pastas galore, Sal’s sumptuous rosemary chicken, brownies, dips, Turkish bread, and so much more. As everyone indulged in the fine feast, gossip and rumours were whispered into eager ears. Mugsy Malone, Bernie Boozé, and reporter Nadia Newman weren’t the only ones seen exchanging money for secrets. The tension between Nick’s divorcée Flora Nemetz-Gadora and ex-girlfriend Cindy Butt could be cut with a butter knife, each one trying to figure out who Nick had dumped both of them for. There were two high stakes deals being negotiated that night. The first was who out of Dina Diva, Madeline Monlow, or Molly Mol would play the lead in the star director Hal Hollywood’s upcoming blockbuster. But the second deal, perhaps far more dangerous, was the plan to usurp Chief Cameron and replace him with mobster Cy Ramsey as chief of police. Multiple parties were overheard bribing Mayor Biggs and his wife Mabel all night. 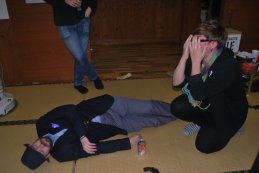 The party thought they had been dished the biggest surprise when Notorious Nick announced his engagement to Molly Mol. But the real surprise came when Rosie’s congratulation speech was interrupted by a blackout and a piercing gun shot. When the lights came back on, Notorious Nick was lying on the ground, dead! 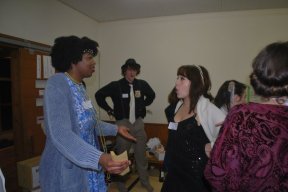 Private Investigator Pinkerton quickly locked the Juice Joint down to commence a thorough investigation. Stuck inside the speakeasy, the party guests-turned-suspects only grew more uneasy. Nick’s sister Natalie Nemetz and Flora’s heated argument threatened to bring the entire roof down. Things got even more interested when it became clear that Nick had ordered Louis’s death. Accusations flew, secrets were revealed, and evidence was brought forth. 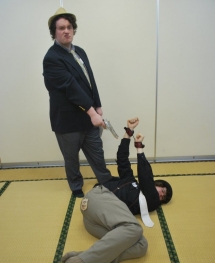 Finally, P. I. Pinkerton had enough information to pinpoint the killer. In a shocking twist, Chief Cameron was revealed as the cold-blooded murderer. In a desperate attempt to keep his job, Cameron had put a stop to Nick’s influence over the Mayor by putting a stop to his life. After a long night of booze, whispered conversations, under the table deals, and all that jazz, the Murder Mystery at the Juice Joint was solved and the killer brought to justice. Case closed. Do you think he had it comin’? 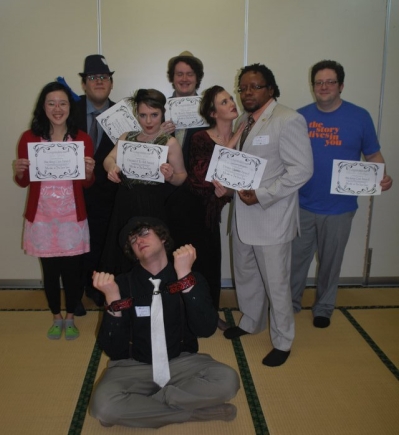 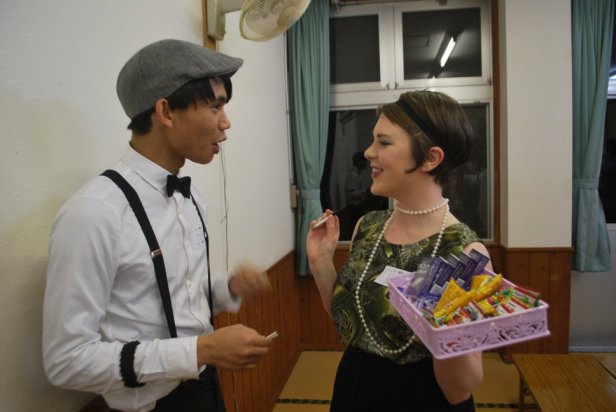 Message from the Event Organiser

Murder Mystery in the Roaring 20s was my last solo event for MAJET and it could not have been a greater success. Everyone put so much effort into their costumes and getting into character. It put a real smile on my face to see everyone’s hard work come to fruition. We were seriously the best dressed group of mobsters and flappers in Miyazaki history! The various 1920s accents beautifully delivered by many guests would have put Leonardo DiCaprio’s Gatsby accent to shame! I’d like to congratulate our Dressed To Kill winner, Jackie Williams; our Best Performance winner, Rosie Taylor; our Money Bags winner Cooper Henckel; and our four Smoking Gun winners, Yan Yijun, Cooper Henckel, Matthew Borisoff, and Charles Phillips. Matt was also our Japanese liaison for this event, without whom we probably all would have frozen to death (thanks for organising the stoves!). The last special thank you goes out to our president and photographer Cassie, and everyone else who helped with the clean up after the killer was revealed and the next morning before check out. Not many other AJETs would have the privilege of hosting such a kind and team-oriented group of members.

This was one hell of an event to plan but it was all worth it to see everyone have so much fun! This is the second Murder Mystery event that MAJET have had the pleasure of organising and I hope there will be many more to come. See you all in April for the long awaited Amazing Race: The Wizarding World of Miyazaki! 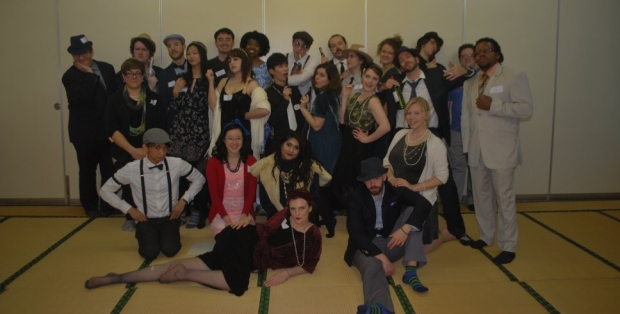 View all posts by Hayley 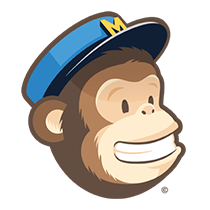