As for hair, the general preference is to go with “natural” colors. That said, westerners have a wider variety of “natural” than Japanese do, so we get a lot of leeway. Hairstyles are pretty flexible as well. We’ve had ALTs with undercuts, dreadlocks, guys with long hair and/or facial hair, girls with pixie cuts, etc. As long as you keep yourself neat and tidy, most things should be fine.

“What you want to be careful of in Japan is sudden and dramatic changes to your appearance, because that’s not really the norm, here. If you make a sudden change, the people around you might wonder whether there is something going on in your life.” – Larissa, former ALT

First impressions matter. However you show up on your first day is what your coworkers will come to expect, even if it is something they are not used to. If a girl comes in with super short hair, or a guy comes in with a ponytail, that becomes the norm from day one. Sudden deviations from that image could prompt negative feedback because it upsets the status quo, regardless of what kind of change it is and whether that style is generally acceptable otherwise.

For example, former ALT Carmen started off with very long locks, but later decided to participate in the World’s Greatest Shave event for the Leukaemia Foundation in Australia, which meant shaving her head. Her superiors were not too thrilled with the idea because it was such a dramatic change from her normal style. However, she had support from other teachers at her school and was able to pull it off because it was an act of charity. And ultimately, it is her own hair.

When it comes to guys, arriving with facial hair and/or longer hair is one thing, but if you grow it out after arriving and don’t keep it well-groomed, your office may think you’ve gotten sloppy and unprofessional. The key is to look clean and professional, whatever your style may be. Girls seem to have a bit more leeway; it’s fairly common for female Japanese teachers to come back from a school break with suddenly shorter hair (probably because that’s their only chance to get it cut).

Ultimately, your hair is your hair. Just be careful and considerate about your decisions. Consider that Japanese teachers aren’t allowed to dye their hair more than a few shades off because it could be distracting to the students. As ALTs, we can generally get away with more, but we still want to avoid causing a distraction. Carmen used her change as a way to educate her students about an important cause, but dramatic change with no rationale could disrupt the status quo at your workplace.

When it comes to unnatural colors, you may want to check with your school in advance. A few JETs have gotten away with small color accents without much trouble.  However, those JETs all waited until after they’d established themselves at their schools and only did small color accents rather than a full head of color:

Thus far, we haven’t had any JETs who began their contracts with colored hair from the start, so unfortunately we can’t give you any insight in that regard.

A great way to show off your style while still being office-appropriate is with accessories. Generally, facial jewelry is frowned upon, though some ALTs have even gotten away with a low-key nose piercing. Girls can usually get away with one or two pairs of earrings and simple jewelry or hair accessories. These can also be great conversation starters with your students, so long as it doesn’t interfere with class time. 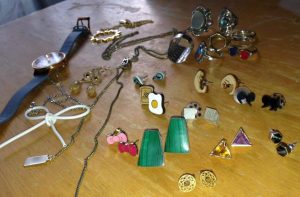 In general, ALTs tend to get away with a lot more than a normal Japanese teacher would. Part of our job is being different and exposing our students to the outside world. The rule of thumb is moderation. Having a couple of conversation pieces is one thing, but when your hair and accessories are a distraction to students, it is a problem.