Greetings and sincere apologies for the delay in posting our stories from November’s sumo adventure in Fukuoka!

Yokozuna is the title awarded to the champion of the sumo tournament. Before we tell you who this year’s champion was, check out how our weekend adventure began!

We started off with Mexican food at the famed El Borracho (“the drunk,” in Spanish) restaurant in downtown Fukuoka. We had a set course dinner, which included tacos with home-made corn tortillas that disappeared as soon as plates landed on our tables, the restaurant’s home-made signature spicy sauce, and more dessert than we could eat!

We’re stoked that sumo weekend 2014 gave the neighboring prefectures a chance to come together, and many Kagoshima and Miyazaki JETs met for the first time at this dinner! Almost everyone indulged in a tasting (or two) of the resto’s excellent daiquiris and margaritas, featuring prime tequila straight from the Mexican motherland. 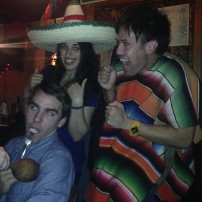 The night featured many, glorious sombreros, large and small: 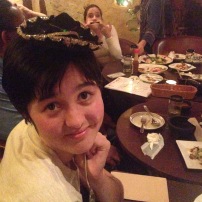 And some lucha libre shenanigans with our very own alter-ego luchadores: 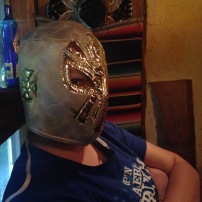 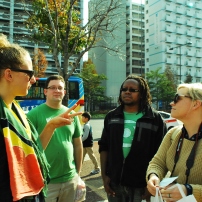 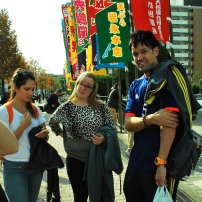 Sunday, however, was what it was all about. Our numbers from dinner nearly doubled as all 24 sumo-goers met outside the Kokusai Centre around lunchtime to pick up tickets from Manu, who had been good enough to order for everyone and thus score a group discount! We were guided to our seats by the stadium staff and then settled ourselves in to watch the first round of matches. 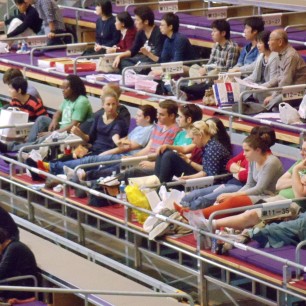 The tournament’s finale began with the lower grade of “Jyonokuchi” and progressed to the higher grade “Makuuchi”.

For each round of matches, the rikishi (the wrestlers) were announced and the crowd began cheering as the men proudly approached the dohyou (the stage) to present their keshō-mawashi, which are long aprons sporting the artwork of each rikishi’s sponsors or their homeland. 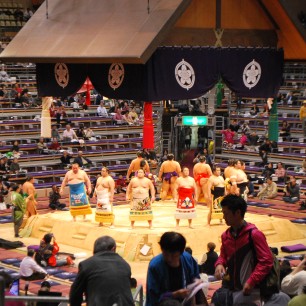 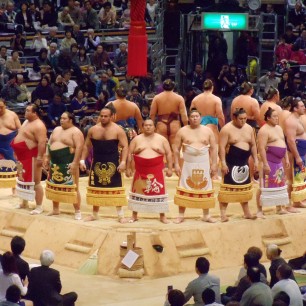 After the contestants left the arena, a brief Shinto ceremony was performed to bless the ring.

Once the ritual was completed, the first match began.

It was over in a flash! Each sumo fight lasts anywhere from ten seconds to several minutes. Fans must pay close attention in order to not miss each match’s outcome.

After the first round of matches ended, some of us wandered the stadium in search of omiyage and snacks. The stalls had a variety of goods featuring the contestants, as well as general sumo-related merchandise.

Everyone was sure to return to their seats for the start of the second round of matches. By this time, the stadium seats were filling out and members of the crowd started enthusiastically calling out for their favorite to win! 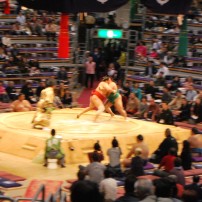 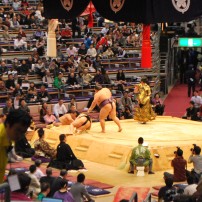 The crowd was especially lively during Endo’s fight. Endo has rapidly been becoming a crowd favorite. Climbing his way through the ranks, this fighter continually holds his own against larger opponents, the fights lasting up to several minutes. This fight was no exception, as he fought his way back from the edge of the ring and stood his ground multiple times. In the end, though, his strength wasn’t enough to throw his opponent. 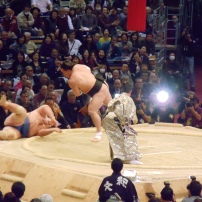 The most exciting fight of the afternoon (besides the finale, of course) was the match between Takanoiwa Yoshimori (born 26 February 1990 as Adiya Baasandorj in Mongolia) and Osuna-arashi (born February 10, 1992 as Abdelrahman Shalan in Egypt – the first pro sumo wrestler from the African continent). What made this fight so exciting? Well, it actually drew blood!

You read that right, ladies and gentlemen. First, understand that two, very large, very strong men charge at each other with as much speed and force as possible at the literal drop of a fist. Then, imagine the slightest mistake in aim in this charge where, instead of landing on top of the opponents sholder, a rikishi’s nose goes straight into his shoulder. Instant broken nose! The bleeding was actually so intense that the priests stopped the match, having the wrestlers freeze in their poses, holding and leaning onto each other to catch their breath, as blood was wiped from the injured man’s face, as well as from his opponent’s now-painted back. The pause made it one of the day’s longest matches and there was an enormous amount of support for the injured rikishi.

To watch this exciting match, check out the video below, chock-full of commentary from the peanut gallery! Many thanks to Carmen Longbottom for submitting her video!

The final match of the day was between the two champions, Hakuho, with 13 wins and just 1 loss to his name in the tournament, and Kakuryu, with 12 wins and 2 losses. When these gentlemen stepped into the ring, the cheering from the crowd was incredulous, the air made electric by the anticipation around the match. The stand offs between these rikishi were intense, drawing lots of cheers from the crowd! In the fight, though, it was Kakuryu’s stumble in the charge that made victory easier for Hakuho to clench!

On this day, Hakuho claimed his 32nd top division championship, tying him with Taiho for the most in the history of sumo! It was a powerful match, incredibly exciting to have been a part of.

To the victor, go the spoils! Awarding the champion all of his prizes took almost an hour between diplomats sharing unique (and enormous!) treasures from their countries, companies glorifying their wares for all to see in unfathomable quantities, and even the prefectures showcasing their famed produce as gifts, including some beef from Miyazaki!

Once the prizes had been awarded and the closing ceremony finished, we began clearing out of the stadium. There was a short parade which began at the stadium entrance, went down one of Fukuoka’s main streets, and ended around the other side of the building. With the marching band in full swing and our yokozuna beaming at the onlookers from a classy convertible, it was a brief but festive affair.

You can check out our full album on our Facebook group! (Sorry, you’ll have to be a member of the group to see the photos)

We’d like to thank everyone who came out from both Miyazaki and Kagoshima to make the weekend a rockin’ one to remember!

Here’s to next year’s sumo adventure!