‘Twas the night before Market, when in ‘Zak City,
Seven sleepy elves gathered to make cookies pretty.
The icing was dried in Chelsea’s kitchen with care
In hopes that the cookies would sell with great flair. 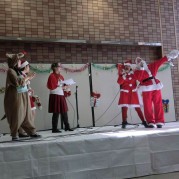 And at the end of the day, we put on a show.
We sang “Rudolph,” “Santa Baby” and, of course, “Let It Go.”
After Santa-ing. singing, icing, and selling,
Twisted ankles and drooped shoulders became rather telling.

So we hopped in our cars and we scooted away,
But MAJET didn’t really have much time to say,
A big thanks to all! We felt your genki cheer!
Merry Christmas to you! Hope to see you next year! 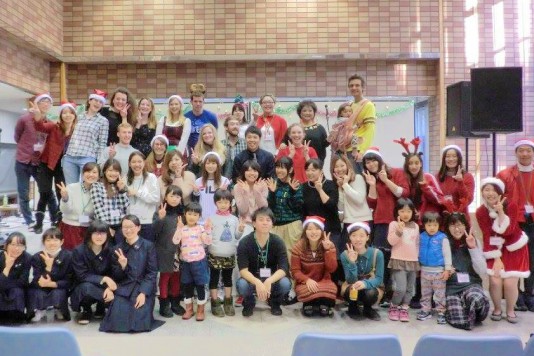 For the second year in a row, we provided the materials for Candy Houses and helped kids build them. It was one of the most popular workshops at the event, with about 100 houses being built! In addition, six generous MAJETers donned Santa costumes and brought smiles to kids` faces with their jolly antics and free candy provided by MCIA. And to close the day, the entire group plus the newly-formed Miyazacappella put on a thrilling caroling performance that got the crowd singing along. We are also very pleased to announce that for the first time, MAJET made, decorated, and sold Christmas cookies at the event, bringing in 17,100 yen. As a result, we were able to completely self-fund our workshop! Click here to see our Facebook album!

As our biggest volunteer event of the year, it was a huge endeavor requiring lots of Christmas spirit and teamwork. Many thanks to Jaclyn, Carmen, Dalin, Jodi, Cassie, Taylor, Beth, Jo, Kyle, Chelsea, Diane, Ian, Hiro, Tim, Tamlyn, Makailey, Edward, Saeko, and Mami!

View all posts by Beth