The following is an article that was written by one of your fellow MAJETers. It was published in AJET Connect Magazine’s March 2015 issue.
It is posted here with the author’s permission and some extra pix ;).

Gus, Jamie, and Sarah, the trio that make up Kero Kero Bonito, are a group of young people in London whose music has been taking off at laser speeds. They recorded their first album independently in the summer of 2013 and re-released it through Double Denim Records last August. It brought nods of approval from producers like Blackbird Blackbird, features by The Guardian, DIY Mag, and Pitchfork, plus special edition album art commissioned by Tower Records. It’s clear that the beats are resounding across the globe and that the message, in all its bilingual glory, is coming through.

Their music is fresh – it’s really the only word that comes to mind. Light and poppy, nostalgic but new, and above all, unique. Fittingly, no one has seemed able to nail just how to describe it, with tags ranging from “contemporary J-pop” to “turn-based RPG soundtracks.” Kero Kero Bonito, though, have wrapped it into something that commands listening to: bilingual schoolyard dancehall.

Click on Sarah’s awesome artwork throughout the article
to listen to the debut EP!

So what is it that sets KKB apart from other artists playing with dancehall samples, Casio beats, and video game melodies? What is the connection between these three Londoners and Japan that distinguishes them from other entertainment seeking merely to exploit the distinct oddities of Japanese pop iconography?

Click to listen to the latest release from KKB, ‘Build It Up’!

Consider that by the 80s and 90s, Japan had created, unwittingly or not, a united culture. No matter where we come from, life 15 to 20 years ago featured no shortage of Japanese influence: videogames and anime, sure, but don’t forget the family car and home gadgets.  Across class and cultural divides, friendships started at the mention of Nintendo or Playstation. It came from Japan, but resonated with and was adopted by everyone.  Kero Kero Bonito achieves something similar: the music is made in the U.K., but it works for anyone who connects with Japan´s international culture – today’s as much as that from the past.

Gus and Jamie, friends and independent musical collaborators for years, have always celebrated this nostalgia in their music. They weren’t alone either, with movements like chiptune and labels like PC Music making waves. The boys became inspired to do a project where they would produce a vocalist. They posted an ad to a Japanese expat board for people in the London area, looking for a rapper. While enthusiastic responses from Japanese salary men wanting to relive the glory days as 80s rock frontmen were tempting, it was Sarah who caught their eyes and ears. A mixed British and Japanese girl, Sarah’s vibrant attitude, artistic presence, and lyrics that challenged global issues and social expectations for young women, sealed the deal for what was to become Kero Kero Bonito.

“Sarah is always willing to experiment with music,” Gus says about the mad-styling KKB front lady. While listening to music together and searching for their sound, Gus was impressed that, from the beginning, “she tried everything we threw at her.”  This included a range of Japanese rap, hip hop, and pop, including East End x Yuri. Sarah digested this auditory homework and took a shot at writing, nailing it on the first try.

“I was really excited,” she says about creating the first lyrics for KKB. “I spent half of my life in Japan and because I have this ability to speak both languages, I wanted to do something where I could use them together. When I was writing the first rap, I don’t know, I was really excited and it… just happened. It felt really right.” Growing up, Sarah’s dad spoke a limited amount of Japanese and her mum, a limited amount of English, so a new idiom was created in her home. “It’s love!” declares Gus. “To me, it’s one language. But I have no idea how they do their tax returns…”

Gus elaborated on some of the bigger issues that KKB explores in their music. “In places like London, being mixed-race is so commonplace and doesn’t get much of a second thought anymore. But, in Japan, it’s almost like people question whether a person can really be two things.” Sarah had the experience of asking herself that very question while attending junior high school in Hokkaido. “Sometimes it felt like being in a zoo, with schoolmates coming to my classroom just to look at me and run away.” Moving to the U.K. provided an environment to fully embrace both cultures and the inner conflict subsided. “I don’t think of it negatively on the whole, though. Because I had that experience, I’m used to not worrying about what other people think when I do things.” While this makes her the perfect front woman, it’s Sarah’s moral outlook that makes her a leader: “The more intercultural mixing, understanding, and diversity, the better!” 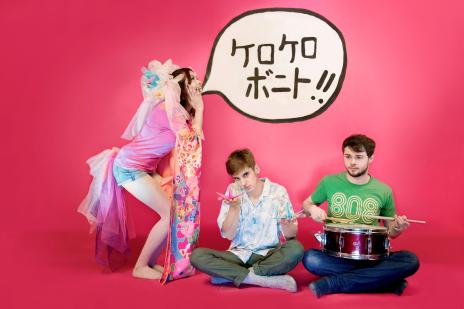 In that very spirit, each member brings something distinct to the KKB mix. While Jamie beat boxes, Gus explains his love for videogames and describes his father’s massive collection of dancehall records, believed to be the largest selection of Jamaican music in south London. Jamie’s musical bedrock is U.K. garage and funky house, the anthems of anti-culture kids in 90s London. Sarah was brought up on 70s punk rock, thanks to her British father. It’s safe to say that she was the only kid at her chuugakkou in Otaru who knew T-Rex. Together with an eye to the new world of Japanese pop as “an antidote” to its British counterpart, the Kero Kero Bonito creature has come alive!

The name itself reflects the band’s heart and soul of international communication. For those more familiar with the big, wide world of Japanese onomatopoeia, ‘kero kero’ is the sound of a frog ribbit. The expression had a certain ring and stuck with Gus when he first discovered it. Together with an article he’d read on bonito, the English term for the katsuobushi fish, it provided the cute image of a ribbitting fish, but also brought the two languages together. 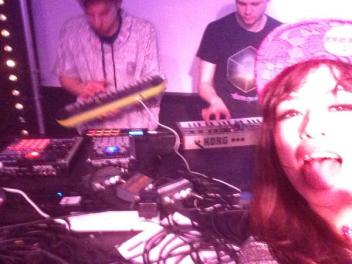 Crossovers aren’t limited to KKB’s name: their second release was a remix album and they’ve done collaborations with artists like Spazzkid and Anamanaguchi to create banger hits. They’re currently polishing off their new album and are hoping to release it before their March tour in the U.S. The band has received invitations to come to Japan and is looking to play in as many places as they can when they come.

While things are definitely taking off, and quick, KKB is full of gratitude. They gave big shoutouts to PC Music, Hannah Diamond, Jamie Milton at DIY Mag, whose exposure helped them find a home at Double Denim, and to Patrick St Michel, a music journalist in Japan who is now one of the big forces in disseminating Japanese music worldwide. They also showed love to the JET Programme: Sarah remembers the ALTs from her junior high school way back when and encourages current JETs to keep inspiring kids with English. Then, at the very least, students can learn the other half of KKB’s lyrics!

You can buy Kero Kero Bonito’s debut, Intro Bonito, anywhere digitally; except for Japan, where it is both digital and on CD. Keep an eye out for Tower Records’ specially commissioned edition of the cover, where KKB’s iconic pink-black-and-white has been swapped out for yellow-red-and-white to match the Tower colours.

If you only listen to one KKB song today,
here’s each member’s recommendation:

Euro-mutt by blood and Asian by heart. I'm all about exploring food, spending time with good people, and trying out the next small adventure in our big, wide world. LLAP View all posts by larashka